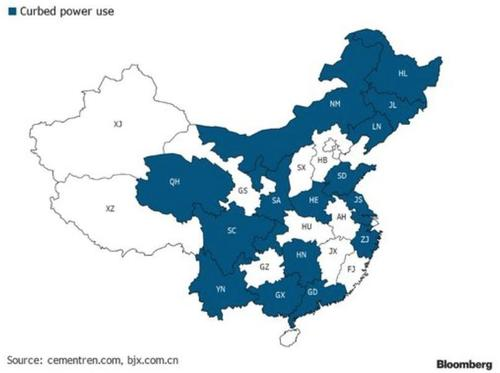 OK, I am starting this immediately after submitting Part 9 (on 10-19-21) so that the train of thought does not go away. Being old, that sometimes happens. The thread we were following was about how absolutely screwed up China's logistical chain was, even in comparison to ours. More container ships are backed up than at our ports. They are taking longer to process them. They are having similar problems to ours as far as clearing out their docks and ports. One more thing to keep in mind from last week, is that much of what they are importing is food. Countries who NEED to import food, really need to import it because there are consequences if people are hungry. If said country is a totalitarian dictatorship (and getting worse as we watch) and China is . . . getting the food off the dock and into the system is vital. If it is piling up, despite major efforts, it means that they can't get it off the docks.

Now let us look at another factor. China is importing food and cash. And, also energy. China imports oil and coal to keep the lights on. Think back to the Carter days, with us being short of oil and natural gas. And the supply of both was dependent on foreign trade; the markets if we were lucky and the acts of our enemies if we were not.

To pay for these, China has to sell stuff around the world, but to a very large extent to us. Computer chips, manufactured goods and components, and a lot of junk. If they can't sell, they can't buy. And just in case you haven't noticed, if WE don't sell we can't buy. We are intertwined, for good or ill (mostly ill) and someday things will come to a screeching halt, involuntarily.

Now let us go back to the energy imports. China is a large country. It has an awful lot of people. And it is a major industrial exporter and importer. That means they have to use a lot of energy AND that they need it to be reliable. In earlier installments I have mentioned how Covid has screwed them up too. That screwing includes imports of energy; oil, natural gas and coal. The mechanism of being s***d is that the ships with the oil, natural gas and coal are caught up in the ports being jammed. Yeah, those do not come in container ships, but the ports are so jammed up that they are still badly delayed. They also use hydroelectric and nuclear, but not as much as they should, which once again is another place where we are intertwined.

Hydroelectric is the second largest source of electricity in China, after coal. They have a couple of problems with it, along with a limited investment. The first is the Communist tendency to only build large dams and power plants, to express the power of the State. See the Three Gorges Dam, the largest power plant in the world. There are only a limited number of places where things like that can be done. And they tend to be out in the Chinese equivalent of the boonies compared to where the people, cities, and factories are. Which is another problem. When you have to have huge lengths of power lines, it means you lose a lot of power to what is called “line loss,” like 10+ percent. There is also the problem of rainy and dry seasons, which China has. That limits the power production as you have relatively little coming into the reservoir for a significant part of the year.

As far as Chinese coal use is concerned, politics gets involved in how we view it. To the Left, Democrats in particular, China is the perfect example of what we should be. What they do not want to mention, especially the environmentalists, is that China puts out more pollution from just its coal-fueled power plants than the entire pollution footprint of the United States. 58 percent of China's electrical power comes from coal. And that coal alone emits 28 percent of the world's total CO2 emissions. Further, because China's domestic coal beds are nasty, dirty, low energy-density brown coal, their power plants are optimized for that.

Where do they get that coal? Well the province of Shanxi produces about 1/3 of China's coal supply. Shanxi has also, this year and actually in the last month or so, been hit with massive rains. Enough rain that about 10 percent of the coal mines have been flooded. Coal mines that are flooded do not produce coal. Coal that is not mined does not fuel power generation. In passing, lack of power means that the pumps keeping coal mines workable do not pump. It also means that factories and cities are dark. It makes coal cost more as it is much more scarce. That increased cost is not only in China. Coal supplies are tight all over the world, because of Covid because of other market conditions, and yes because of the Chinese shortage. The shipping tie-ups make it even worse. The net result is that coal prices rise. If China is buying coal from overseas, because that is what they need to use, then they have to trade to get the money for the coal. What they are ending up with is a shortage of coal in China, and what they can get is more expensive. Which they have to deal with somehow. How the Communist Party is dealing with it includes absolutely forbidding power plant operators from spending more for coal, and thus when the coal runs out, electric power gets turned off and “rationed.”

They have problems with their nuclear programs too. Once again, it probably is related to Chinese industry's quality control problems. They had problems a couple of months ago SE of Macau at the Taishan power reactor complex. It was serious enough that they took a reactor totally off-line, and it is still off-line. It was bad enough that China's French partner in the building of the complex reported it to the International Atomic Energy authorities. Problems were absolutely denied by the Chinese government at first. Then it was said that there may be a single fuel rod broken and leaking into the coolant. Shortly afterwards, it was admitted that there were “a number” of broken rods, and a build up of radioactive gasses inside the reactor. After that, they admitted “some” of the gasses were released. Then they said that they were shutting down Taishan #1 “for maintenance,” but that there would be bulletins. Yeah, no bulletins. But interestingly enough, the vice-president of Harbin Engineering University, Zhang Zhijian, who was in charge of the Taishan complex suddenly had a fatal fall from the second floor of a building on campus in June.

The reduction of power from that complex affected hundreds of factories (mostly small to medium sized) and a number of cities and towns. But then again, they were not alone. While China is not as bad off as say California and reliant on imports of electricity from outside, it was right at the edge of having sufficient electrical power. Today the Chinese are being pushed across that edge. As I noted above, in a decree from on high, worthy of coming from our government, Chinese power producers have been told that they are not under any circumstances allowed to pay more for coal to generate electricity. Which means with the rising prices, the transportation screw ups, and the lack of power back up; the power plants are running out of coal. So the response has been to have power rationing and major blackouts including in major cities and industrial areas. We are going to try to include a map of Chinese provinces right below here, showing that the majority are under rationing of electricity. If we can't get the map to show, the text below will explain the details.

China claims it has 34 Provinces. However that includes claiming Taiwan as being a Chinese Province, which Taiwan differs with strongly. And they count the capitol city of Beijing, Beijing's port city of Tianjin, and the major metropolis of Shanghai as Provinces. So let us say 30 Provinces in reality. Only 11 of them are not under electrical rationing. Of that 11, several are both distant and sparsely populated desert. The rest of the entire country is under various electrical shutdowns. In some areas, power is only on two days a week. Others have fewer days of no power. And on some of the days power is not consistently on. I don't care if you are making computer chips, or plastic Christmas tchotchkes, or toys; you cannot run a manufacturing operation like that. Which means people out of work, things not being made to be sold, and incidentally lack of sales means no money to buy coal. . . or food.

Now that sounds like a self-perpetuating circle of multiple forms of organic waste impacting rotating airfoils. It is. And it is worse, a lot worse. There are economic, demographic, and internal Chinese political angles that are really going to shove things off the cliff. Once again, I am running up against mandatory length limits. So I will shut down tonight (10-20-21) and get it sent in tomorrow morning. And tomorrow start on the next part, and more on those angles that put China in a far worse position than we are. Mind you, them being in worse shape does not make us in any conceivable way in good shape. But it means that help is not going to come from that direction, because they are going to be preoccupied.