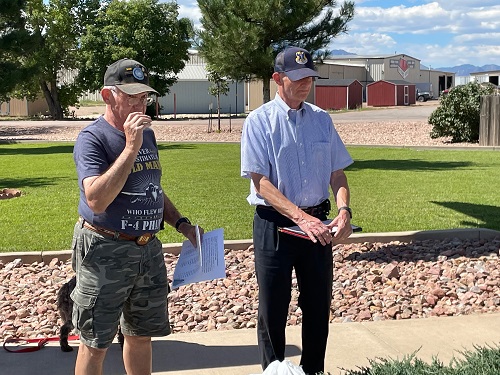 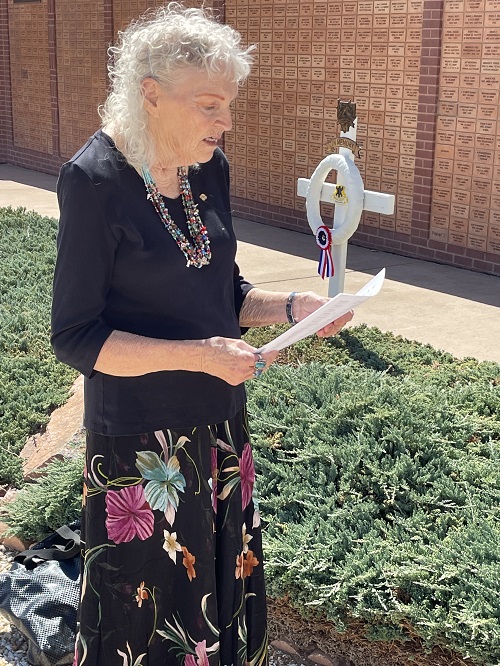 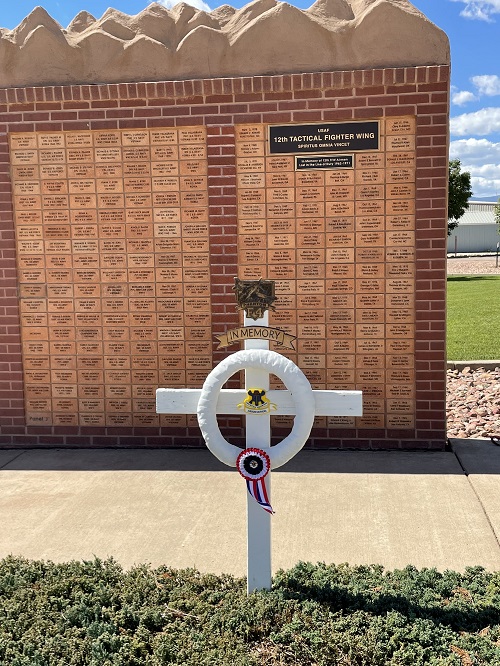 Cars raced by on U.S. 50, oblivious of the ceremony taking place at the Fremont County Airport War Memorial Wall on Sept. 16, 2022, 21 years after the original dedication of Panel J.

Emceeing the event, former aircraft maintenance technician at Cam Ranh Bay Air Base in Vietnam, 12th Tactical Fighter Wing member Sherif Lepi welcomed the guests to the annual informal ceremony then played a rendition of “Stars and Stripes” and “Star Spangled Banner” on his computer.

While talking about the history of the 12th Tactical Fighter Wing, Lepi recognized Cañon City native Col. Leo S. Boston, who disappeared in Vietnam in 1966 and was not discovered for more than 30 years. He also honored Cañon City native Ron Packard, a 12th Tact member, who also was killed in North Vietnam.

Lepi also talked about the concept of how the reunion originated after 12th Tact member Ron Doughty saw a picture of the F-4 Phantom fighter jet sitting at a munitions training center in Denver in the newsletter, “Smoke Trails.” By the time he contacted Arvada resident Gene Rust, the jet had been donated to Fremont County. Rust contacted former county commissioners and other community members, who agreed to set aside the last panel next to the jet.

In 1996, the group started the 12th TFW History Project, Inc. to collect money to add the names on bricks for the last panel on the wall. After a successful campaign, the group hosted its original dedication of the panel Sept. 16, 2001, immediately following the 9/11 attack. Members of the group vowed the terrorists would not keep them from attending the ceremony. Since then, many of them have made the effort to continue the tradition each year with the exception of the Covid-19 years.

During the first ceremony, held Sept. 16, 2001, Gen. Pete Sutton provided his written remarks for the day, which Lepi quoted at this year's event.

“The memorial you are dedicating today honors those courageous airmen who gave their lives while serving in the 12th Tactical Fighter Wing. To the families of those airmen, thank you for their service and your commitment to preserving their memory and the honorable lineage of the 12th.”

During the event, 12th Tactical Fighter Wing member George Solis spoke to the group about his experiences in Vietnam.

“Fifty-one years ago, I was a member of the 12th Tactical Fighter Wing, serving in South Vietnam,” he said. “Men listed on this honor wall are patriots. We, their fellow airmen who fought alongside them, hold them dear. Most of us were lucky to survive our wartime assignments, come home and pursue our dreams. Their names on the wall were cut down in the prime of life, denied fulfilling careers and past times. Their bereaved loved ones perpetually feel the pain of their loss. With this monument, 12th members honor our friends' sacrifices and cherish their memories.”

He noted the F-4 Phantom II aircraft that is mounted beside the wall at the Fremont County Airport was also part of the memorial.

“Many women of the 12th Tact Fighter Wing, serving in a variety of roles, worked tirelessly to keep two squadrons of Phantoms flying day and night to carry the war to the enemy. … The Air Force's F-4 is revered with awesome power with the ability to pack a full spectrum combat.”

The ceremony ended with the playing of “Taps” on the computer, where the audience stood in silence, honoring the names on the wall.